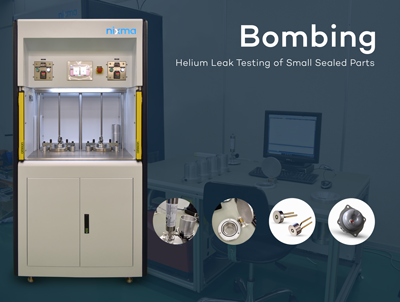 When leak testing these small sealed parts, helium must be used to perform the leak test. This can be done during the assembly process or after assembly by a technique known as helium bombing. A bombing chamber can be used to inject helium into small, sealed devices. The bombing method is commonly used when it is impractical to inject the helium tracer gas into the part during assembly. 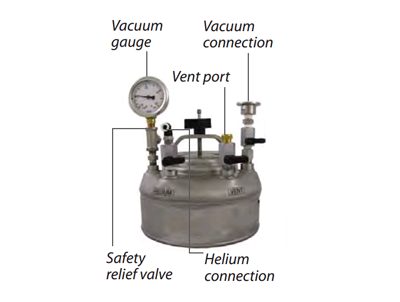 Number of part per test
Can test many part per cycle

It is common for small sealed electronic devices to be bombed (injected) with helium prior to leak testing as a way of introducing helium into the part. The bombing equipment must allow for control of helium pressure, bombing time, and proper evacuation and venting of the helium. Devices with larger internal volumes will require higher bombing pressures and longer bombing times in order to introduce sufficient helium.

In helium bombing, it is difficult to predict how much helium will be actually introduced into the part. For this reason it is often desirable to run a series of validation tests using the bombing parameters to ensure the desired results are obtained.Helium bombing is normally performed in batches. After bombing, the parts should be sprayed off with air or nitrogen to remove surface absorbed helium.

Exploring Bangkok with our SAG members