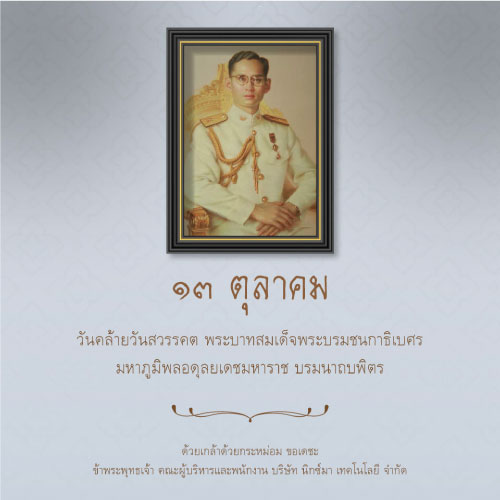 October 13, 2016 is the day of the death of His Majesty King Bhumibol Adulyadej The Great, which brought great sorrow and deep sadness to several Thai people throughout the country and abroad. It was a difficult time for people to express the feelings into words or in writing. Only tears flowed down the faces. Thai people embraced the image of their beloved king with shed tears, weeping and whining as if losing their heart.

Time has passed from the day when the Thai Nation and the Thai people had the greatest loss, the loss of His Majesty King Bhumibol Adulyadej The Great whom the people of the whole country worship, love and honor as the father of the land. Today, all Thai people still humbly remember His Majesty with the utmost gratitude. He sacrificed and devoted himself to the country and all Thais by performing his royal duties tirelessly without thinking of his own pleasure.

He travelled everywhere whether he had to climb mountains, wade the forest or exposure to the strong sun and rain. He did not become discouraged and kept on going, especially when he was aware that his people were in hardships and faced difficulties in life. This was to create the benefits, happiness and stop the suffering for his people as he considered them as his own children. His Majesty had continued these royal duties reigning for 70 years to the throne until his death.

October 13, 2020 is the 5th anniversary of His Majesty the King’s death. His Majesty is still in remembrance in the heart of all Thais. Throughout 70 years, he sacrificed and worked very hard for the Thai people to have a better life’s quality and happiness with self-sufficiency through royal initiatives all over the country that became models to be applied for making a living in their own area, including interdependent use of forest resources, water resources and soil resources. In total, there were over 4,500 projects. His Majesty travelled to every area to see how his people live, what are the causes of their problems and to give them motivation.

With his compassion, all Thais share the same feeling that he is their father and the hardest working father in the world for his children. There is no other father like this in the world who devoted himself for his children to live well with sufficiency. We should then follow His Majesty’s footsteps for the nation to prosper according to Thai culture and traditions that will bring sustainable peace and tranquillity.
Today, His Majesty King Bhumibol Adulyadej The Great has passed away for 5 years. But regardless of the current situations that may cause little disturbance to the country, with Thai roots, the heart of respect to the nation and religion, and virtues that all the Kings bestowed upon people in the nation, the loyalty to His Majesty the late King Bhumibol Adulyadej remains clear. He is the center of Thai people’s love and unity and for the love of independence. Despite His Majesty’s death, with his virtues, goodness still remains in the land and protects Thai people and the country to live peacefully.

With highest respect to His Majesty Nixma group 3 October 202

What is the difference between the jig and fixture?